Sabine Hossenfelder attended a global summit dedicated to the question whether it’s right for science writers to present quantum mechanics as spooky, strange, and weird. Imagine how much fuel would be saved if the participants could have stayed home and responded with the right answer which is

There is really no room for long yet intelligent debates and diatribes. Quantum mechanics was surprising to the physicists and is still surprising to the beginners who are learning it today. But as Giotis mentioned in the first comment under Sabine’s blog post, it is not really surprising that a deep enough theory is surprising because humans and their ancestors have been trained by experience where effective, superficial, and conceptually misleading laws are enough to understand what is going on.

The adjectives such as «spooky», «strange», and «weird» placed in front of the phrase «quantum mechanics» have become so omnipresent that people no longer have the courage to question this practice. Yet, it is deeply flawed and harmful.

Many people have said the right thing about the counterintuitiveness of quantum mechanics. For example, this monologue by Richard Feynman says everything that deserves to be said about the general topic.

You may see that Feynman uses some «extraordinary» adjectives for quantum mechanics, too. While Sabine et al. have been discussing adjectives such as

so fantastic, so wonderfully different, so marvelously different [plus Feynmanesque emotional gestures].

You know, all these six adjectives have pretty much the same cause – the difference between the fundamental logical structure of quantum mechanics on one side and the mostly classical intuition of the human beings and other animals on the other side.

But can you see a difference between the six adjectives? You should. The first three adjectives sound rather negative, the last three sound unambiguously positive. Which of the flavors is right? Obviously, Feynman’s flavor is right while the anti-quantum crackpots’ flavor is wrong.

It boils down to the scientific method. In science, we look at the potential disharmony as follows. There is a disagreement about the way how Nature (and especially the microscopic phenomena) works. The disagreement is one between two fundamentally different theoretical frameworks, a disagreement of the type

low-brow biological instincts of mammals and the stupid, retarded, or excessively stubborn people

the laws of quantum mechanics.

The scientific method tells us that we should derive the predictions of both competing hypotheses. What do they imply? When you do so, and the technical aspects of that are actually agreed with by everyone who has some training, you will find out what Nature’s answer is. Surprisingly for some, quantum mechanics is 100% right and its alternatives presented by the idiots are 100% wrong. The precise line of argumentation may be subtle, technical, or difficult, but the overall answer to the main question is not.

Confusion and the sense of weirdness and spookiness are integrable parts of the research by a genuine enough physics thinker. However, whenever the research actually achieves something, these sentiments are confined to the spacetime regions with a smaller \(t\) – «before the realization» – while the regions with a higher \(t\) – «the post-discovery life» – is dominated by the understanding.

It’s really the understanding and the recognition that the theory really does work (and that Nature works as the theory says) that is more characteristic for science. The initial confusion is always there but confusion is also an inseparable part of other, much less scientific human enterprises such as religions.

Let me phrase a similar idea about the role of confusion and the excitement about confusion and understanding a little bit differently.

A child may be intensely impressed by some phenomenon or its existing explanation that looks «weird». Her classmates often don’t care but she (mostly he) does. By her enhanced interest in surprising patterns in Nature, she displays her interest in science – and perhaps the potential to study it. But the potential isn’t everything.

If she ever gets any good in physics, she becomes able to demystify the surprising observations, to reorganize them in her brain so that they make complete sense at the end. She is sure about the answers, she can even answer questions that were never answered (or asked) before, and she even knows why she is sure. This new relationship of hers to the surprising patterns in Nature is inevitable if she makes any progress of turning herself into a scientist. This comment is really true by definition. She may still be religiously confused by other big mysteries but the point is that she must have solved and get reconciled with at least some of those in the past, otherwise she is not following the scientific path towards the understanding of Nature.

So if someone cares whether quantum mechanics is spooky, he may display his interest in the question. But if he isn’t able to figure out that physics has revealed the correct general theory of these phenomena even though he is 30 years old and the theory was found 90 years ago, well, then it probably means that the person hasn’t reached the contemporary physics research and the probability is increasing that he never will.

What’s wrong with similar pictures trying to suggest that the wave function of Schrödinger’s cat – and any general enough superposition of state vectors – is «weird» is that the illustration indicates that the cat described by the superposition has both values of the «aliveness» (or another observable) at the same moment in the sense that you could in principle see both simultaneously. Quantum mechanics doesn’t claim anything of the sort. Quantum mechanics unambiguously implies that if the cat is alive (in the physical or scientific sense, i.e. observed to be alive), then it is not dead, and vice versa. The wave function for the position of the cat (containing both «alive» and «dead» terms) isn’t a classical wave or a «shape of the cat». It is a complex-quantum-generalized probability distribution. But the different options that are assigned probabilities (orthogonal states in the Hilbert space) are still mutually exclusive.

The adjective «spooky» was first used by Albert Einstein. He cared whether physical theories and concepts look natural or contrived – because this man cared about physics at the deep level – but when he concluded that quantum mechanics was «spooky» or «incomplete» or otherwise defective or likely to be replaced, he was just wrong. Einstein has contributed a lot to physics and even to the quantum theory. But his answers about the biggest conceptual questions about quantum mechanics such as «quantum mechanics Yes/No» were simply and indisputably incorrect.

Some people still seem to increase their self-confidence by comparing themselves to Einstein – he found quantum mechanics spooky, after all. But they are missing that

The only difference, a sociological one, is that the irrational anti-science attitude is much more widespread among popular writers in physics than it is in biology – perhaps because quantum mechanics (and, perhaps, physics in general) demands that one fixes his thinking about the world much more radically than what is enough to understand the theories in modern biology. The brain surgery needed to replace the animal instincts by the correct scientific theory – quantum mechanics – simply has to penetrate much deeper inside the brain when we talk about modern physics than when we talk about biology. At the end, the fundamental postulates and rules of quantum mechanics aren’t really hard or complex. They are just «very new» – one needs to be deep, honest, and bold enough to understand that science demands one to change his mind even about some «fundamental questions of reality». Too many people simply fail to be sufficiently deep, honest, and bold.

All this practice of attaching overtly or covertly negative adjectives to quantum mechanics should stop – people who do not stop that should be recognized as anti-scientific cranks in the very same sense as the people defending geocentrism or other falsified hypotheses in the history of science. As I said, children’s care about «weirdness in Nature» is a symptom of their interests and potential, not their actual ability to learn physics. But even when it comes to the interests and potential, saying that quantum mechanics is «weird» doesn’t really increase the interest. Who doesn’t care about these things won’t care, anyway.

At most, the atmosphere in which quantum mechanics is considered «strange, weird, and spooky» energizes those who don’t really want to learn and discover how Nature works. This atmosphere encourages them (e.g. the kids who have hated the mathematics classes pretty much from the beginning) to speak – and the present world is really drowning in the ocean of urine from these anti-scientific morons. These frequent would-be deep proclamations about the weirdness of quantum mechanics shouldn’t be interpreted as signs of the public’s interest in science – they are pretty much symptoms of just the opposite, the public’s desire to find excuses why they shouldn’t be learning science. Instead of encouraging those for whom primitive animal instincts are more important than the scientific evidence, science writers should encourage the self-criticism of everyone – to make people sure that if they disagree with Nature how it works, it is their defect, not Nature’s or science’s defect.

But in the present world where populism and asslicking of the stupidest people’s asses is the norm, it is probably too much to ask. 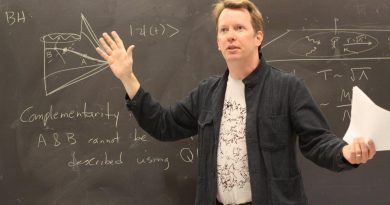 Why quantum mechanics has to be complex and linear… 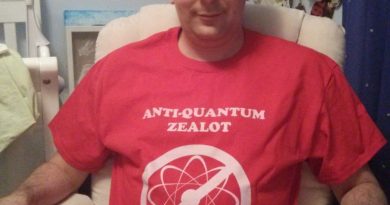